What is the secret of the Torensluisbrug?

The Singel was an outer canal of Amsterdam from about 1425 to 1593. On the inside of the water stood a fortress wall with towers at regular intervals. The Jan Roodepoortstoren was situated on a kink in the fortress wall, next to which was a small passage in the city wall and a narrow wooden bridge that had been built over the water. The tower, gate and bridge were named after Jan Roode, who owned a rope mill here along the city vest. Prisoners were kept in the tower. 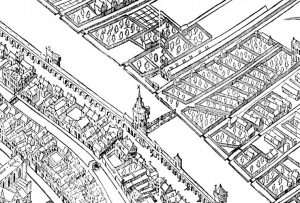 After the city expansion of 1593, the medieval city wall became redundant and demolished. Some wall towers still in use survived for the time being; also the medieval Jan Roodenpoortstoren.

The environment now changed completely: on the other side of the Singel, large new houses were built and in 1614 they started building the Herengracht and Keizersgracht. The old fortress tower, which stood on an important connecting road between the new construction and the old town, was a disfiguring relic of the past. Mayor Reynier Pauw also thought so. He lived here on the Singel diagonally opposite the Jan Roodepoortstoren, overlooked the medieval rampart. It was therefore not surprising that the plan arose to provide this tower with a crown in the same way as the Montelbaanstoren and the Haringpakkerstoren on the Y side had been decorated in 1605.
Work started on 10 May 1616: the older tower was surrounded by a square skin. The wooden crown was placed above this square masonry lower tower. 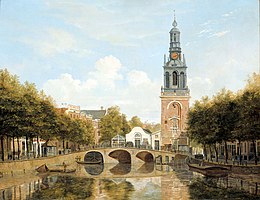 The tower was demolished in 1829. The wide bridge has become a strange element in the city, a thing with a past, with a secret.

Why does the Nieuwe Kerk not have a tower?

The history of the Nieuwe Kerk started around 1380 next to the orchard of Willem Eggert. He had donated this land near his house as building land for the church and was the builder and financier of the church, which was dedicated on November 25, 1409. The New Church as we know it today came about in phases. In 1565 the Oude Kerk got a new tower and the Nieuwe Kerk did not want to be left behind; they started with the piling work for their own tower, but the changing religious and political climate made further implementation of the plans impossible. Until 1645, when the work of plumbers caused to burn out the church completely, except for the choir and radiant chapels. Now there are two ruins close together, because the old town hall from the fourteenth century was also a dilapidated building.

Amsterdam is then, in the middle of the seventeenth century, at the height of its power. So grand plans are being made for a new town hall. And mayor Willem Backer introduces the plan for a large tower of the Nieuwe Kerk: a very high tower, which should have been even higher than the Dom of Utrecht: 115 meters. In 1647 the last of the 6363 piles for the tower is driven into the ground. An ancient magical ritual follows to ensure that the construction runs smoothly: a building offering worth 200 guilders in gold, and a first stone laid. 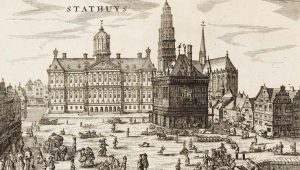 In 1783 the unfinished hull was largely demolished. What remains is the substructure for the west facade of the church.

How can herring help to determine the cityscape of Amsterdam?

On the corner of the Singel and the current Prins Hendrikkade there used to be a tower. That tower was first called the Holy Cross Tower, a Catholic name. During the Spanish rule of the Netherlands, townspeople who abandoned the Catholic faith were imprisoned in this tower. At nighttime, the ‘convicts’ were secretly thrown into the IJ, gagged hand and foot, without any interrogation or trial. This part of Amsterdam was called Haringpakkerij, which ran from the top of the Singel to the Martelaarsgracht, the current Prins Hendrikkade. Here the herring was salted and cooked by the herring packers. Herring fishing was an important source of income for the city. After the Alteratie  (1578) the tower was renamed Haringpakkerstoren. The herring inspectors also had their offices there. Close supervision and regulations were necessary, as tampering was a regular occurrence.

An ornate spire was placed on the original tower in 1606. A city ordinance of 1601 stipulated that when a small bell in the tower tolled, the herring packers who were nearby had to appear at the workplace, to do their share of the work to be done. 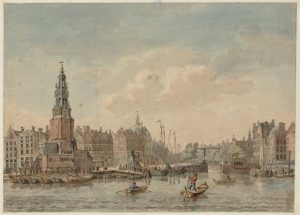 The tower was demolished in 1829. This austerity operation was carried out because the impoverished city found it too expensive to maintain the neglected building. On the occasion of the 50th anniversary of Stadsherstel Amsterdam, this institution offered the city the reconstruction of this tower. However, on April 12, 2010, it was announced that she was waiving. This for fear that the authenticity of the city center would be affected.

Thank you for your reservation!

Check your mailbox for a confirmation.